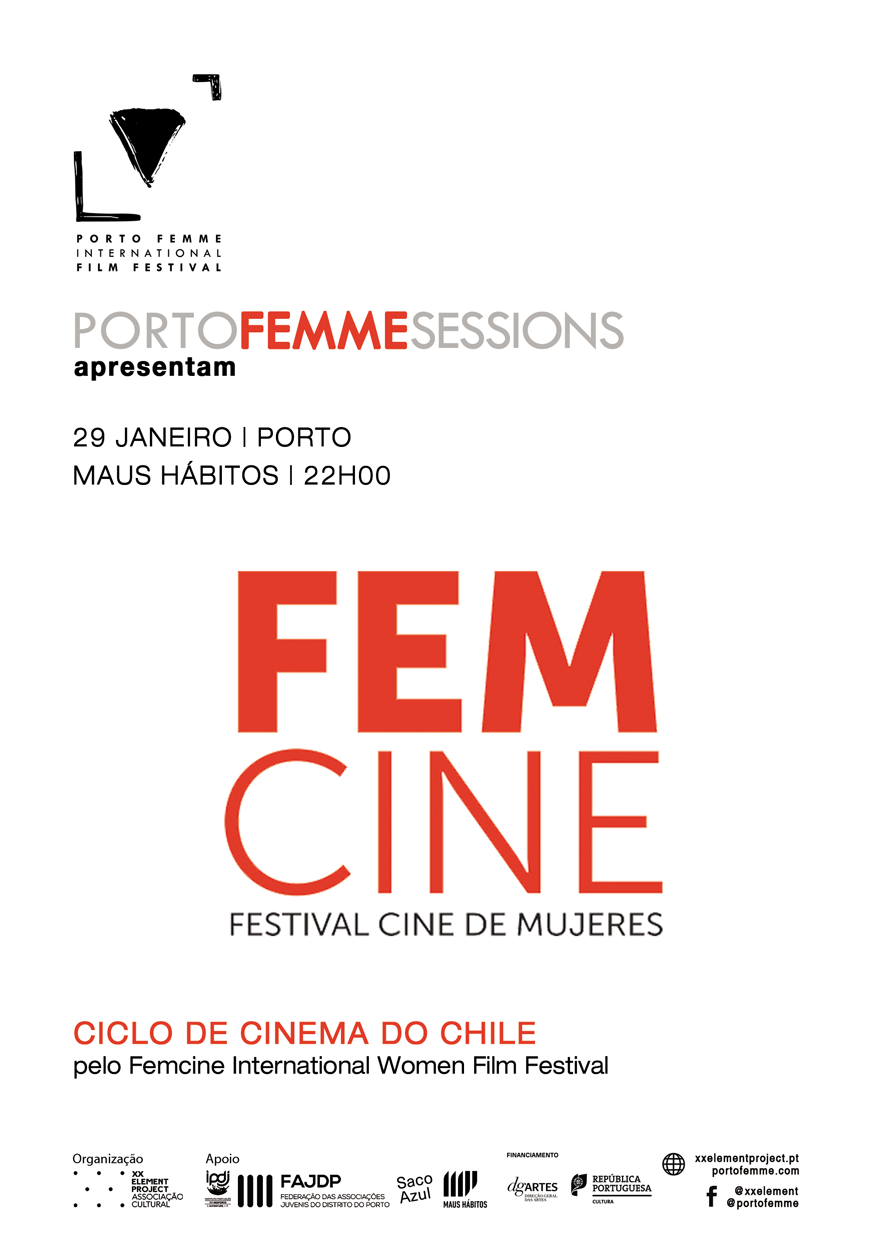 We welcome 2020 with the Chilean Cinema cycle directed by women, curated by FEMCINE – Women’s Film Festival.

FEMCINE, the Women’s Film Festival of Santiago, is the first and only Chilean film festival dedicated to celebrating, publicizing and honoring films made by, for or about women.

The festival was launched in 2010 by a group of women associated with the Chilean audiovisual world, who believe that cinema is a powerful tool for reflection and social development. The aim of FEMCINE has always been to highlight the work of female filmmakers and to showcase and value the cinematographic representations (made by men or women) about common themes in a society such as ours, where despite technological and economic development, there are still many examples of gender inequality. Our goal is to be a space where current and future filmmakers can find inspiration, information and contacts to create networks that can lead to the enrichment of our cinema.

The Femme Sessions are thematic cycles in which the common denominator is films directed by women. The objective is to give visibility to the work of women in the film industry, through the projection of their works and, whenever possible, their presence in the sessions, promoting the encounter between the public and the authors.

FOR ME AND ALL WOMEN

Blanca, 25, was sexually abused by her stepfather as a child and never spoke of the subject. Now, she is willing to tell her mother, but the celebration of the 15th anniversary of the mother’s marriage with this man is ahead, starting a countdown to Blanca’s revelation.

Caroline, 12, is in the middle of a dissertation in front of her classmates when she lives her menarche. From that moment on, she begins to have strange visions related to the red colour that accompany her throughout the day. When at her house, she searches the internet for the reason for her bleeding, and when she concludes that her first menstruation has arrived, she begins to try different methods to cut it.

Paula is obsessed with certain scenes from her past. These memories make her move away from the everyday world and live in her memory. Her fixation has her immersed in mental images and movie scenes. What is the reality? The constant traffic of ruminant images that pass through the mind and through the eye confuse the own, the authentic, the original.

To obtain the monopoly of fruit production, Don Juanito invests more than imagined. Installing, on his childhood town, an eternal sun; that allows you to cultivate day and “night”. Developing a green fertilizing smoke, which invades the whole place, affecting the health of the villagers.

Leonor and her husband Hernán suffer the recent loss of their daughter Valentina. While Leonor saves the belongings of her daughter, she discovers an audio that reveals a truth, until now, hidden. Leonor must decide what to do with this discovery.

In his struggle to continue living in a city he hates, Aníbal, a student of geology, fights the depression provoked by the rhythm of urban life through exercise and escapes to the countryside. The lack of concentration in his studies and his own will make him hesitate in his decision to stay or leave the race at the end of the semester, and with it, Santiago.