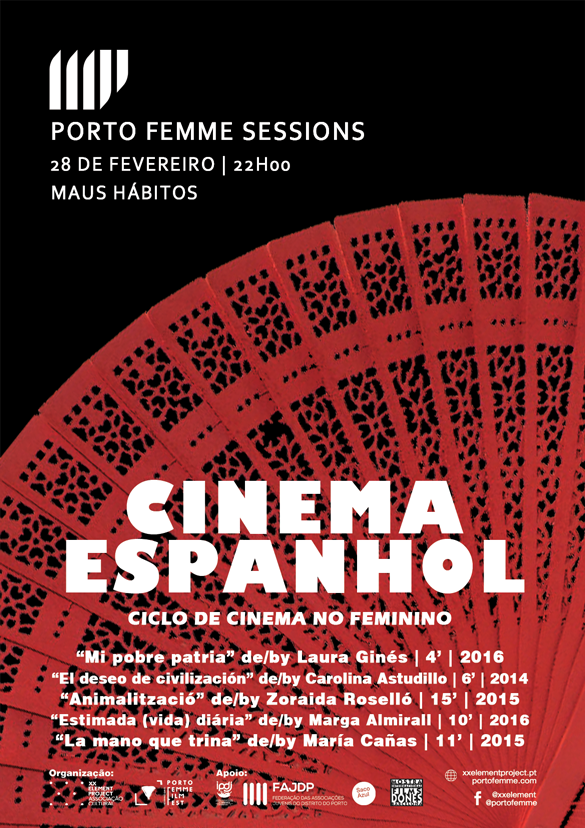 The next session of Porto Femme Sessions is coming. In February, it is on the 28th that we receive you in the show room of Maus Hábitos with a cycle dedicated to Spanish women filmmakers.

War as a preposterous and absolutely masculine fiction -as well as the educational and occupational exclusion of women in a society that educates them to serve and be mothers- is repudiated by Virginia Woolf in Three Guineas.

The Civilization Desire is a piece that appropriates family movies filmed in Spain during the Republic, the Civil War and the early years of Francoism.

The home movie becomes an alternative chronicle to the great stories, that reveals social differences and gender stereotypes learned from childhood, in the civilization of strength, despised by Woolf.

Animalization is a short film that emerges from the controversy we felt with the presence of Franco’s monument installed in the city of Tortosa. In our reflection the legitimacy of a democratic process of withdrawal request of a monument of Franco clearly diverge with the symbolic meaning to remove a monument with a high artistic value. The piece provokes reflection of the viewer to position to a current dilemma affecting historical memory. Retrieving the opening speech of the monument we hear the voices of our parents and grandparents. Thus, we question about the current state of this huge structure that remains undaunted in the middle of the river that divides Tortosa and offers a unique speech to be mentioned. His withdrawal, reamining, dismantling, musealization and other proposals are on the table for discussion.

From childhood and teenage diaries to Youtube video blogs and Instagram visual diaries: a small journey across female self-representation in the millennial generation. A personal, intimate view of the ways of constructing (re)presentations of daily life.

“The Hand that Trails” is an experimental artistic research with no goal of making any profit. Its intention is parody, didactic and critical.