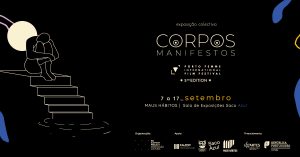 The singular of the body at the end will be plural: Bodies – Screens, Bodies – Fields; Bodies – Visions; Bodies – Feelings; Bodies – Voices; My body. Your body. Our Bodies. Bodies – Manifests.

Multiple looks at bodies materialized in different artistic expressions. Looking at Bodies by the artists who thus form a collective in which their works bring reflections on the subject.

We seek to be plural in the works and in the artists, also seeking a transfeminist and intersectional vision.

A collective exhibition around the theme Bodies that marks the 5th edition of the Porto Femme International Film Festival.

Abril Xavier, artist and trans proletarian, graduated from FBAUP. She works in various symbolic fields through the use of plural means, understanding bridges between identities.

Ana Efe was born in Porto, Portugal in 1972. She lives and works in Porto, Portugal. Master of Fine Arts from Central Saint Martins College of Art and Design, London Degree in Sculpture from the Faculty of Fine Arts of the University of Porto. She was an Erasmus Scholar at Coventry University, Coventry School of Art and Design, UK. She has exhibited since 1997 in Portugal, Spain, France, Italy, the United Kingdom and Austria. A transdisciplinary artist who has been developing work in the field of installation, photography, video and painting, approaching the theme of affect versus reason.

Helena Teixeira (Porto, 1998) is a freelance artist in the field of photography and an activist in the fight for climate justice, participating in an intersectional way in other causes as well. He graduated in Audiovisual Communication Technologies at ESMAD in 2020. He is currently finishing the Master course in Artistic Photography at IPCI, and is training in photography and video technologies. Her practice tends towards a more introspective aspect, combining artistic expression with a path of self-knowledge and the search for a reconnection between being and (its) nature. He then reflects on his identity, while also exploring different forms of image creation.

LETÍCIA MAIA (Brazil. 1988) Lives between Brazil and Portugal. She is a Master’s student in Plastic Arts – Sculpture, at the Faculty of Fine Arts of the University of Porto. She holds a BA in Communication of the Arts of the Body from the Pontifical Catholic University of São Paulo. Her artistic practice is situated in performance in transdisciplinary dialogue with sculpture, photography and video. She is interested in investigating issues related to the social construction of the body; especially with regard to the construction of gender, power relations, docility, behavior, control, normativity, subjection, submission, passivity, obedience and violence. In recent years, she has participated in festivals, shows, exhibitions and artistic residencies in Brazil, Chile, Colombia and Portugal. She is one of the organizers of the Movediça Mostra de Performance art, which takes place annually since 2017 in the city of São Paulo, Brazil.

Collaborative duo of multidisciplinary artists. They have training in design, cinema, photography, music and visual arts. Scholarships in the EAVerão 2015 and 2016 study program at the Escola de Artes Visuais do Parque Lage, Rio de Janeiro. Márcia Bellotti has a master’s degree in Sound and Image with a specialization in Cinema and Audiovisual from UCP Porto, and Luiza Porto develops atelier work focused on contemporary art in engraving techniques and textile arts. Together they were selected for several artistic residencies.

Luísa Sequeira is a researcher, director and curator of cinema, working on different platforms, such as video, film and photography, exploring the intersections of cinema and emerging media. She studied journalism and has a specialization in documentary filmmaking, at the moment she is doing a PhD in Media Art. Luísa worked at RTP, coordinating and presenting several projects.

Mónica Santos is a multifaceted author with a unique artistic vision, creating universes that reinvent the real, giving them a poetic and surreal guise.

As a Gulbenkian grantee at the Royal College of Art, Mónica started taking her first steps in illustration and working with textiles as a plastic material.

After training as a textile designer, she founded this desire to work with this medium in the most varied ways, from costumes to prints.

Self-taught artist started her artistic production in 2012 through Street Art, painting in the streets of Toronto and Montreal, CA and São Paulo, BR, but over time she expanded her art to other platforms such as: painting, sculpture and digital.

In her authorial work, she explores universes of feelings and sensations. With a playful visual language, sometimes surrealist and with simple features, it articulates social, personal and imaginary issues.

She has already done works and participated in exhibitions in Brazil, Canada, Italy, Germany and Portugal. It is currently possible to visit one of her murals in the arches of Rua da Restauração, Porto, PT.

Raquel Pereira (Simba) is an artist, who shoots essentially self-portraits. They currently live in Aveiro. They started in this aspect as a model, but it was quickly in the self-portrait that they found themselves, self-taught, passionate about creating art.

Likes to gather inspiration from everything they see, they characterize their art as strange, naked, emotional and artistic.

Thais de Menezes is Brazilian, currently living in Porto, taking a Master’s degree in Art History at Universidade Nova de Lisboa and graduated in Dance at Faculdade Angel Vianna (RJ). Her works move between performance and visual arts, which have already been presented at Sesc, Galeria Gentil Carioca (Rio de Janeiro), Curitiba Biennial, MASP (São Paulo), Centro Cultural São Paulo, among others. Since 2012, she has worked with the collective Desdito with the philosopher Fabio de Oliveira, as well as establishing directing and curatorial partnerships with other artists such as Leandro Souza, Patricia Bergantin and Danilo Patzdorf. She is an invited artist and structuring member of the Extension Course Cinema in Colors at the Fluminense Federal University in Santo Antônio de Pádua and articulates the ATRAVESSA project in Porto in her studio, establishing research conditions for young artists. Establishing fissured dialectics between subject, choreography, genre, city, body, has been a recurring interest in her works with a decolonial contribution.