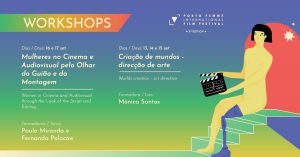 In this workshop, participants will be able to deepen their knowledge in Art Direction throughout the process from creation to execution. It will be held in person, at the Casa das Associações do Porto.

Mónica Santos, director of “O Casaco Rosa”, is a multifaceted author who has won two Sophia awards, by the Portuguese Academy of Cinema, and a nomination for Césars, by the French Academy, in her cinematographic career.

On the 16th and 17th of September, from 10:00 am to 5:00 pm, participants will be able to register for the WOMEN IN CINEMA AND AUDIOVISUAL THROUGH THE LOOK OF THE SCRIPT AND EDITING workshop, tutored by Paula Miranda and Fernanda Polacow.

This workshop will also take place at Casa das Associações do Porto and will give special emphasis to the process of writing and editing a film.

Paula Miranda is an editor but did not come from film school, she studied Fine Arts in England. She quickly realized that where she felt at home was in creating narratives with moving images, which naturally led her to embark on editing. She traveled around Rome, Barcelona and New York telling stories in several languages. Fernanda Polacow is a Portuguese-Brazilian screenwriter living between São Paulo and Lisbon. She has developed, written and directed projects for cinema and audiovisual, both fiction and documentaries. She also mentors content creators. It is part of the Berlin International Film Festival through the program Berlinale Talents 2022.

To participate in the workshops, simply register on the festival’s website. Both workshops have a registration fee, with a discount for film students from partner schools. 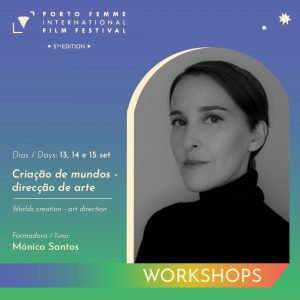 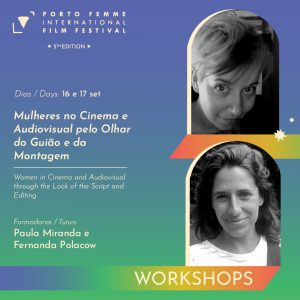