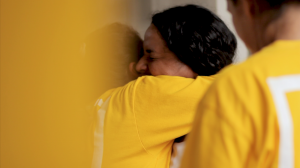 Indebted to All Women

Indebted to all Women takes us inside a house in El Salvador where we observe women in the kitchen as they casually converse, laugh among themselves and prepare a meal. The tone of the conversation eventually changes; soon we realize that these women are victims of rape, as well as ex-convicts. But why? Why would a rape victim end up in prison? The first direct-to-camera interview follows this scene, where Teodora Vasquez voices the question on our minds: “I never thought I would go to jail”.  In voiceover, a broadcast from La Radio de Todas, the first feminist radio station in El Salvador, and signals that this is not a problem of the few but that there are many women in the country who are in jail with sentences of up to 30 and 40 years. After hearing from two inmates incarcerated on charges of “attempted and aggravated homicide” for a crime they say is “unforgivable even by God”, the radio broadcast situates us within the issue that will be tackled by the documentary: “the absolute criminalization of abortion and its consequences on women’s lives.”

In El Salvador, abortion has been criminalized on all grounds since 1998. Regardless of whether or not the mother’s life is in danger, whether pregnancy resulted from rape, miscarriages or medical complications, abortion is inaccessible for those coming from the poorer strata of society, as they cannot travel overseas to get one legally. The documentary frames this fact as the negation of a human right and builds its case through factual snippets provided by interviews with individuals involved in fighting against this law. Activists, lawyers, politicians and doctors all make-up the contextual backdrop, while interviews and observational-style scenes make the women’s voices heard– those still behind bars and those who have been acquitted. The filmmakers María Lobo and Roi Guitián weave together these interviews to provide an image of the direct impact of the law on the realities of the women affected by it.

The professionals fighting against criminalization of abortion repeatedly underline the class-based discrimination women are subjected to in the country, situating the law as a problem that only concerns poor people. As one medical professional states: “No wealthy women are imprisoned”. As for the women – they share their experience in all frankness, with astonishing clarity and detail, depicting the ruthlessness with which they have been treated by authorities. In their recollection, they remember the rain. As such, rain is used as a visual trope throughout the film in relation to these testimonies, creating a strong sense of identification between the lived memory of the victims and the reality of the film.

Women also talk about the consequences of such accusations and the stigma that comes with it. First, there is the social taboo relating to the loss of a child. This taboo is located in the power structures operating within a very patriarchal and conservative society, filled with myths surrounding maternity as the main, if not only, role women should uphold. Such beliefs are propagated by the catholic church’s fundamentalist speech against human rights throughout the country. Second, the fear of stigmatization has led to cases of suicide in consequence relates to pregnant teenage girls. This section of the documentary incorporates further information through the interviews, but also through texts on the screen. This is an effective visual strategy as the numbers provided with regards to teen pregnancies, sexual aggression and punishment are striking, leading us to a singular, urgent conclusion: the law must change. 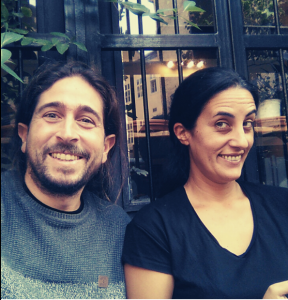 The radio broadcast is used as a communicative device throughout the documentary, emanating over the images of city life while relaying information, and culminating into a call for action against the patriarchal control over women’s bodies.  Indeed, strength through unity becomes the ultimate goal, as the climax of the film is composed of a montage of protest images cut to protest music, highlighting the importance of turning anger into action and becoming visible in the public sphere to demand rights. Only through solidarity in action can results be achieved – whether in the courtrooms or on the street, hope comes from this unity. As a matter of fact, the case of Teodora Vasquez exemplifies this argument of the documentary, introduced to us from the outset of the film. She is one of 17 women who were sentenced up to 40 years in prison as a result of a miscarriage.  The campaign for Vasquez’s liberty finally achieved results 10 years after her initial incarceration, thanks to the collective fight and pressure put on authorities and awareness created globally.

Lobo and Guitián carry their activist mission to the exhibition principles, with the film being open for viewing, free of charge, online (1). At a time where abortion rights are being contested, even in so-called democratic countries of the global north, like in the recent case of the United States Supreme Court’s official reversal of Roe v. Wade, this documentary is required viewing, reminding us that the fight of women across the globe is our fight too, and it is only through international networks of solidarity that defeating ideological prejudices can be realized.

(1) The documentary was commissioned by AGARESO (The Galician Association of Communication for Social Change) and can be watched with English subtitles on their You Tube channel: https://www.youtube.com/watch?v=UcanNtb_woM&t=467s

Şirin Fulya Erensoy is a Marie Skłodowska-Curie Post-Doctoral Fellow at Film University Babelsberg Konrad Wolf. Her academic work concentrates on video activism as an alternative media practice, censorship in documentary film practice in Turkey and gender in genre cinema. Şirin was the host of independent news outlet Medyascope TV’s English news bulletin This Week in Turkey from 2019-2021 and worked as a lecturer in Film and Television at various institutions in Turkey. She also has practical work experience in documentary film production.